Video and Article: Beyond the Diamond – The Unity of FAU’s Baseball Team

Heading into the Conference USA tournament and potentially an appearance in the NCAA regional tournament, Florida Atlantic baseball’s bond as a team has never been stronger.

John McCormack has been the Owls’ head coach for the last eight seasons, leading the team to multiple regional appearances and sending several player to the professional ranks. Much of that success has been fostered by McCormack’s personal relationships with players off the field.

“The relationship that coach and I have is really special, especially because he’ll randomly call me during the day and I’ll call him and ask how he’s doing,” said McCormack’s high school recruit and junior shortstop CJ Chatham. “You don’t get that from a lot of coaches.”

“He provides what he’s gone through into baseball,” said Frank. “Say you go 0-4, you still have to give everything you have for your teammates, as he did for us.”

While McCormack underwent treatment for a cancerous tumor in his cheek, he still attended the majority of practices and games. As a result, this already tight-knit group of players and coaches became even closer.

“If I was not here, they would text, ‘You alright?’ [and] ‘How ya doing?’” said McCormack. “They are a group of good guys. They care about each other. They care about the team and it certainly showed through in what I was going through.”

Junior pitcher and designated hitter Sean Labsan said it made him feel important when he saw his coach showing up to the fields during one of the most trying periods of his life.

“Knowing that he had all that stuff going on, but in the end he wanted to be out here,” said Labsan. “It’s kind of telling us that we are one of his priorities in his life and everything. He gives us everything he has, so we give him everything we have too.”

McCormack said, “I’m feeling good. I’m a month or month and a half out of chemotherapy. I’m getting some strength back and some energy back, but it’s day by day, little by little.”

With their coach in remission and returning to a more regular schedule, the Owls were hit with yet another blow. Junior catcher Kevin Abraham would have to undergo chemotherapy for leukemia.

“Kevin is, first of all, one of the best teammates I’ve ever had,” said Frank, who took over the catching position when Abraham began treatment. “Just yesterday, he was here and I worked with him for probably 30 minutes before the game about catching and the ideas he puts into the game from behind the plate.”

McCormack, undergoing similar treatment at nearly the same time, has felt his relationship with Abraham evolve into a special bond and still sees him as a valuable asset to the team.

“Maybe they got in a fight with their girlfriend or maybe they’re 0-3 and things aren’t going so well. It’s nothing compared to what Kevin has gone through,” McCormack said. “So, I think he brings a little balance and brings it back to reality for us, but he’s done a nice job and the guys love seeing him.”

Frank said, “Even going through the situations he’s gone through, he still comes out here with a smile on his face. He’s still the same Kevin that everyone knows and he just comes out here and has fun.”

An assistant coach in his first year with the Owls, Greg Mamula feels there is an undeniable bond that has come about from the hardships of this season.

“I feel like this whole team has become closer because of the situation this year,” Mamula said. “It’s brought everybody together and the coaching staff is included with that.”

As the end of May approaches, the Owls find themselves fighting for the Conference USA post-season title.

“Coming here and seeing everything [McCormack has] gone through, it’s really made me into the man I am today,” said Frank.

Mamula saw that McCormack always seemed to be looking after those around him.

“That’s kind of his personality,” said Mamula. “He’s a very giving and caring person.”
Taylor Craig is a contributing writer with the University Press. For information regarding this or other stories, email taylorcraig634@gmail.com or tweet him at @taylorcraig. 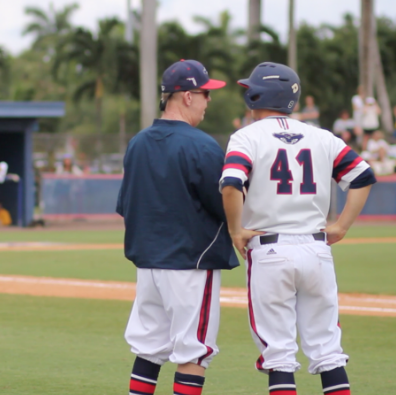 View all posts by Taylor Craig